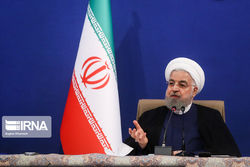 Economic war is in line with plots hatched by the global arrogance against the country, President Rouhani said at the cabinet session in Tehran on Wednesday morning.

Someday, they wanted to damage the Islamic system by assassinating the officials or imposing war on Iran, and today they are persuading their plots over Iran, the president noted.

About Moharram rituals to mourn for martyrdom of Imam Hussein (AS), the third Imam of Prophet Mohammad (PBUH) Infallible Household, the president said that the form of mourning will be different from the previous years but the rituals will be held based on health protocols and regulations.

Since its Dec 2019 outbreak worldwide, the coronavirus pandemic has created serious problems for holding many events and meetings as it has killed over 784,000 across the world up to now.

However, all including cyberspace, Islamic Republic of Iran Broadcasting (IRIB) and people should wave the flag of mourning anyhow.

He then said that all officials in charge of holding Moharram are responsible for their duties [to hold the rituals regarding the safety of the people].