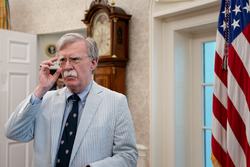 IRIB - US Former national secretary John Bolton has dodged a question about his ties with the anti-Iran Mujahedin-e-Khalq Organization terrorist group, calling for "regime change."

The former national security advisor, who was ousted by US President Donald Trump, spoke at the National Press Club about his promise to celebrate regime change in Iran in 2019.

"I didn't hear the excerpt from my speech but I can tell you what I did say in 2018 was that the objective of the United States' policy should be regime change in Iran before the 40th anniversary of the 1979 revolution."

Iran’s Foreign Ministry says the US and Europe, as supporters of the MKO terrorist group, have the blood of Iranians on their hands.

He further claimed that, "the Trump administration never adopted a policy of regime change. I think that's a mistake."

The MKO has conducted many assassinations and bombings against Iranian officials and civilians since the 1979 victory of Iran’s Islamic Revolution. It notoriously sided with former Iraqi dictator Saddam Hussein during his 1980-88 war on Iran.

Out of the nearly 17,000 Iranians killed in terrorist assaults since the Revolution, about 12,000 fell victim to the MKO’s acts of terror.

The United States runs a campaign of disinformation to spread civil unrest and promote destabilization in the countries it targets for regime change, Professor Dennis Etler says.

The terrorist outfit was on the US list of terrorist organizations until 2012. Major European countries, including France, have also removed it from their blacklists. The anti-Iran terrorists enjoy freedom of activity in the US and Europe, and even hold meetings with American and EU officials.

Europe is home to the rogue entity and American taxpayers' money has funded the atrocities of the corrupt grouplet.