Abe to return to work 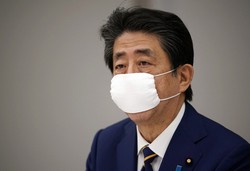 "I believe the prime minister has worked restlessly and has overused his body," said Natsuo Yamaguchi, the leader of Komeito Party.

Prime Minister Shinzo Abe will return to work as his three-day summer break ends on Tuesday, during which he remained in the capital and devoted one day to a hospital visit for what his aide called a regular health checkup.

It became the first summer for Abe not to visit his support base of Yamaguchi Prefecture or his vacation home in Yamanashi Prefecture after he returned to power in 2012, following a short first stint in 2006 and 2007.

Abe has told people around him that the virus has forced him to make changes to his routine summer visits, and he is unable to play golf, his hobby, either. Speculation about the 65-year-old's health condition has grown as he spent about seven and a half hours at Keio University Hospital in Tokyo on Monday and a number of people close to him have expressed worries about his exhaustion from continuously working to fight the novel coronavirus pandemic.

"I believe the prime minister has worked restlessly and has overused his body," said Natsuo Yamaguchi, the leader of Komeito Party, the junior coalition partner of the ruling Liberal Democratic Party.

On Monday, Deputy Prime Minister Taro Aso said, "It is not surprising for (someone) not taking a rest for that long to be in rough shape." Abe worked for nearly 150 days straight from late January through late June and took days off on July 23, 25 and 26, prior to the latest three-day break. He spent all of the six days off in Tokyo. Amid a recent resurgence of coronavirus infections, Tokyo Gov.

Yuriko Koike has urged residents not to travel outside the capital for summer vacation. Although LDP tax policy chief Akira Amari, who is close to Abe, and others have suggested that the premier extend his summer break, the idea was rejected by Abe, according to sources familiar with the matter. Abe abruptly resigned in 2007 due to an intestinal disease called ulcerative colitis but said later he had overcome the illness with the help of a new drug.

He became Japan's longest-serving prime minister in November last year. A hospital source said Abe underwent additional tests on Monday after a regular health checkup on June 13, and a source at the prime minister's office said the hospital visit was just to be sure of his health when he returns to work. The office has yet to explain about the checkup results. The hospital visit came after a weekly magazine report earlier this month that Abe had vomited blood at his office in July.

Following the report, Chief Cabinet Secretary Yoshihide Suga denied Abe is in poor health, saying, "There is absolutely no problem" with him.