Norwegian Foreign Minister Borge Brende announced that Oslo has opened a one-billion-dollar credit line to help the Norwegian companies with export of their commodities to Iran. 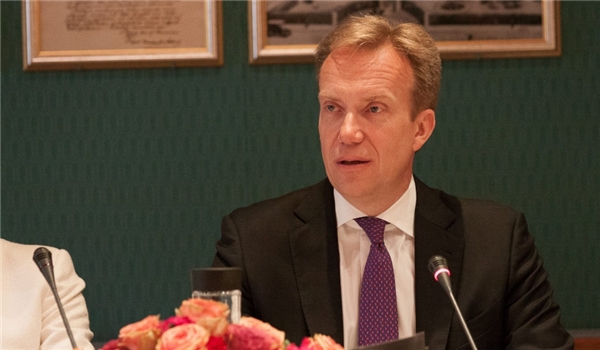 "About $400 million dollars of that credit line ($1 billion has been used to export the modern technologies to Iran," Brende said in a meeting with Iranian Economy Minister Ali Tayyebnia in Washington.

Tayyebnia is in Washington to attend the 2016 annual meetings of the International Monetary Fund (IMF) and the World Bank Group in Washington DC on October 7-9.

"Iran is a good trade partner due to its political stability and economic growth," Brende said.

The Norwegian foreign minister said that his country will encourage the Norwegian companies, banks and financial institutes to cooperate with Iran.

"DNB as Norway's largest financial services group is due to be active in Iran's market," Brende added.

The Iranian economy minister, for his part, said that Tehran is willing to widen relations in different economic areas with Oslo.

Tayyebnia hoped that obstacles in the way of bilateral cooperation would be removed in near future.

"Oil, gas and fisheries are among the issues on which Oslo and Tehran can focus," the Iranian economy minister said.

In March, Norwegian Ambassador in Tehran Odyssey Norheim underlined that Norway and Iran are keen to boost the level of their bilateral relations.

"The Norway-Iran relations are booming after the implementation of the Joint Comprehensive Plan of Action and the removal of sanctions," Norheim said in a meeting with Kerman Governor-General Alireza Razmhosseini.

Norheim said she met the CEOs of the Norwegian companies in Iran and the heads of Iranian firms in Oslo to find out more about the existing capacities for cooperation in oil, gas, marine industries and alternative energies.

In a relevant development in Oslo in February, Iranian Deputy Foreign Minister for American and European Affairs Majid Takht Ravanchi said Iran and Norway were opening a new chapter in ties, particularly in modern technology transfer, finance, and investment.

Speaking at a forum of Iranian-Norwegian investment opportunities and businesses in the Norwegian capital, he said that after the implementation of the nuclear deal between Iran and world powers there are no longer any restrictions in the way of foreign direct investment, technology transfer and finance in the Iranian market.

"Norway has excellent capacities in shipping, oil, gas, nuclear safety, environment, renewable energies, and finance. Iranian public and private sectors are prepared to sign joint ventures with their Norwegian partners, while acting as a gateway to the region’s growing market,” he added.

Back to top
All Rights Reserved by IRIB news agency.
Powered by: "Iransamaneh"
mobile view