China says that Washington has no right to demand enacting the snap-back mechanism after its unilateral withdrawal from the nuclear deal of 2015. 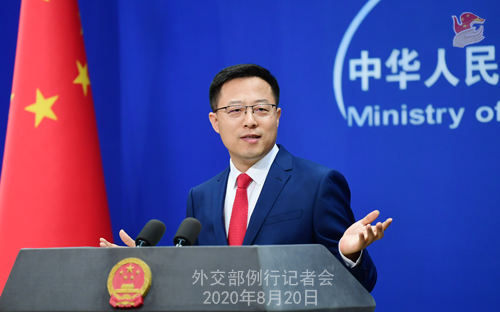 Tehran(iribnews); China says that US push for Iran sanctions self-serving political manipulation And Washington has no right to demand enacting the snap-back mechanism after its unilateral withdrawal from the nuclear deal of 2015.

“Like we stressed many times, the US unilateral withdrawal from the JCPOA (the nuclear accord, officially known as the Joint Comprehensive Plan of Action), means renunciation of its rights as a participant of the deal, and it is in no position to demand enacting the snap-back mechanism,” Chinese Foreign Ministry Spokesman Zhao Lijian said at a regular press conference on Friday.

The spokesman emphasized that the parties to the JCPOA and an overwhelming majority of the Security Council believe that the US demand to enact the ‘snapback’ mechanism has no legal basis, and it has not been invoked.

“This fully demonstrates that the US unilateral position runs counter to the wide consensus of the international community and its attempt to sabotage the JCPOA will never succeed,” Zhao said.

China urges the US to “stop going down the wrong path, otherwise it will only meet further opposition,” he said.